Does my business need to be using Instagram reels? 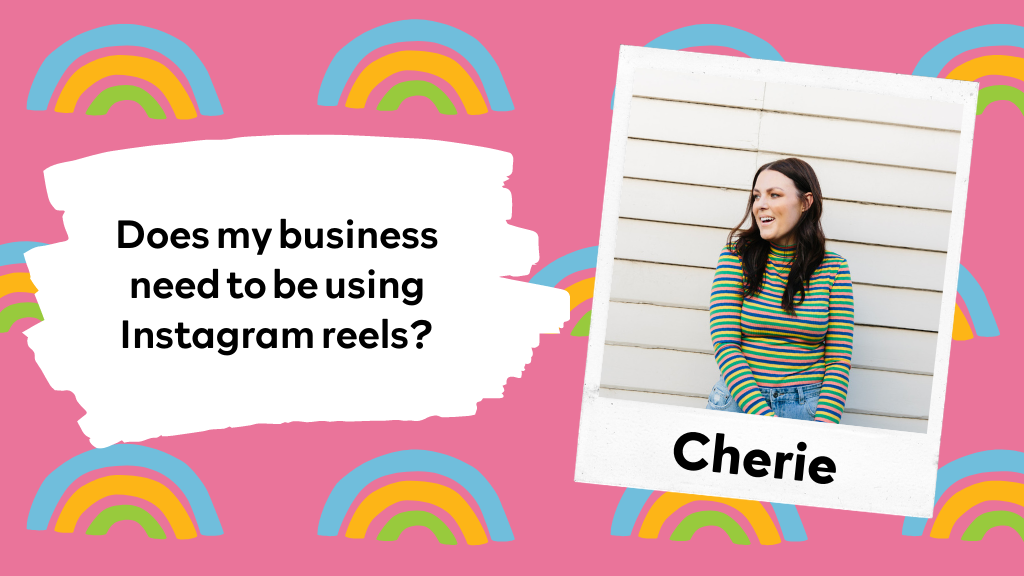 Instagram reels, eh? It’s like you just started feeling comfortable rockin’ up to IG stories and whoomp [there it is] … Instagram reels just about appears outta nowhere.

‘Cept it wasn’t outta nowhere, because we know Zuckerberg well enough now to know that if he can’t buy sumpin’ [Snapchat], he’ll copy it [IG stories], and so TikTok? … meet Instagram Reels. #lol

And so I wanted to drop in today with this here blog post to answer the question we’re [currently] being asked the very most: “does my business need IG reels?”.  And I mean, because this is a blog and I don’t know exactly who I’m individually writing to … I’m going to be general here and say “basically, yes … but only if you have the time, and it doesn’t become something incredibly overwhelming for you”.

So why am I dishing out a “basically, yes!” response? Well, it’s because I wanna structure this post to sit within the theme of celebrating the business owners [and content creators] who go forth and embrace *new* … and who subsequently reap some pretty significant rewards because of that ability to embrace new.

Right now? … that’s the folks who’ve gone and embraced IG reels.  I mean, srsly, just look at the reach [and if I’m being really honest? Some of the reels I’ve seen have been pretty ordinary, but have still gone and clocked 40-50k+ views].

[I’m not saying you should embrace “ordinary” for reach’s sake.  The opposite actually.  I’m just highlighting the obvious: the early adopters are seriously being rewarded RN.  And some of the content is incredible, and some of it is bluddy ordinary. #lol].

With this in mind, let’s unpack why your business might be suited to embracing Reels [instead of running in the opposite direction of them];

They stop the scroll, and start the dwell.

My name is Cherie.  I’m a Content Specialist.  Most of my time planning content > mapping content > creating content > writing content, and content’ing content is designed with the seriously humble goal of basically getting our followers to stop their scroll … and land on us [and look forward to landing on us, preferably].

To do that? I need good content > good imagery > a punchy, introductory one-liner before my bigger social media caption, but what I’ve been finding lately? … I load an IG reel and bang.  Just like that? I’ve not only stopped the scroll [almost instantaneously], but I’ve also started the dwell.

Y’see that’s the second thing I want from my content after I’ve managed to snag a scroll stop … and it’s dwell time [otherwise known as time spent on post].

I used to be able to clock up dwell time with a longer caption, or a carousel share, or fairly simple video, but now? IG reels has been something I’ve found our audience doesn’t just watch once, i.e they watch the reel > they watch it again to take in the text > they then scroll to the actual caption and read that too.

And actually on that? … they take up a significant amount of “social media real estate”.

So if we go back to wanting to stop-the-scroll, I think about IG reels and how they achieve that just because of how they actually present to your followers, i.e taking up a LARGE chunk o’ that news feed [just by dimensions *alone*].

Wanna grab some seriously good attention? The fact that – from a dimensions perspective – IG reels is kinda designed to take up a pretty big chunk o’ your followers “social media real estate” puts you in pretty [bluddy] good stead.

I’m a [fiercely proud] neurodivergent Mama, and one of my babes? Dyslexic + ADHD.

She doesn’t love reading [and I don’t blame her.  It’s an absolute marathon effort for her to be able to take in text], but if we pop a documentary / TV show / movie on? She gives it her undivided attention / is able to take in all info / remembers it for years to come.

Text? A polar opposite experience for her, tbh [that often ends in tears].

Instagram reels? I feel like it’s a beautiful way to present information in a beautiful new way.  And for those hell bent on sticking to loving a good read in IG captions land? … just watch the reel, then flick awn down to the caption.

Feels bluddy inclusive and accessible to me, tbh.

They’re not just for the extroverts.

I know this, because I am not an extrovert.

It shocks everyone, because I’m a bluddy good workshop facilitator [and yes, it’s taken me x6 years to acknowledge that I’m bluddy good at presenting workshops, ha!] … but I’m introverted AF, and subsequently need a good 7 day break in between presenting anything.

And so when IG reels first dropped? Look, I was horrified.  I was honestly horrified.  I watched reels dropping with folks dancing and pointing to things, and I remember whispering to myself, “dear God, no!” [I even made a reel about it here].

And then? Like a true introvert? I watched > I absorbed > I took it all in, slowly, and through my observations? I realised what I loved, versus what I didn’t love.

And now? … I do reels my way, i.e the introverted way.  And we’re clocking 15-20k views on the majority of our reels [which is NOT even close to what we get on our IG static content, btw].

FYI? We average 50-100k reach on LinkedIn, so please know the majority of my excitement is still around LinkedIn’s organic reach capabilities, ha!

But still … my point? Instagram reels aren’t just for the introverts.

And finally? A fixed mindset on social media will literally lead ya nowhere.

The thing about social media, tho? … for the people saying, “ugh.  Reels.  You won’t catch my dead dancing to my favourite tune, whilst pointing to text” etc? I say to that: a fixed mindset [as opposed to a growth mindset, and having an ability to embrace change] will get you nowhere in terms of moving the needle on your business’ social media strategy.

I swallowed my early days [like, literally the first 3-4 days] discomfort with Instagram reels, and then I went and made awkward little ditties like this reel … and I subsequently joined the “now averaging 15-20k reach per reel” club.

Drop the perfectionism.  Drop the paralysis by [over]analysis.  And go and tag us in your creations … we live for this sh*t.