Servant leadership without setting yourself on fire 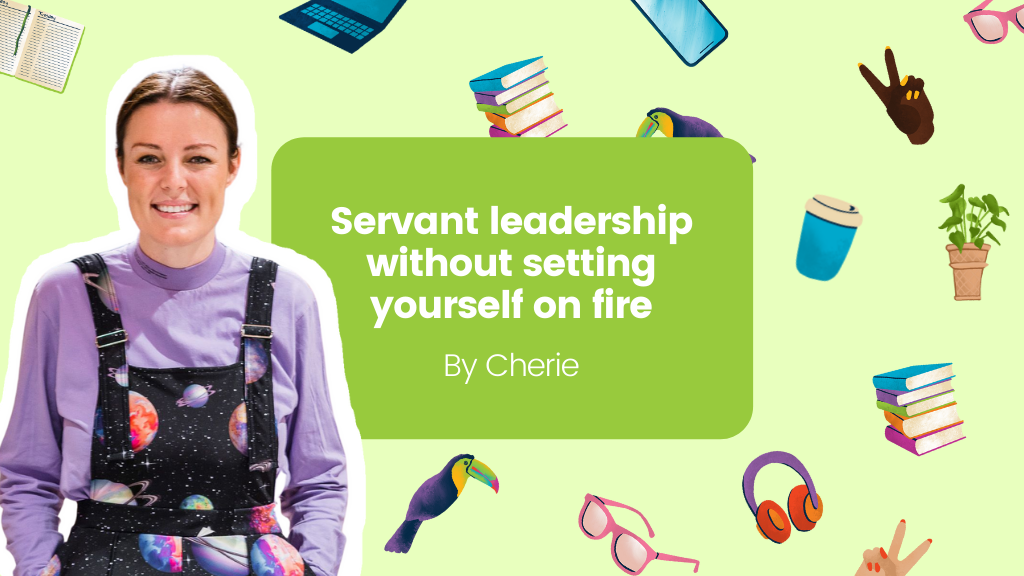 My leadership style here at TDP HQs is best described [and most easily described] as servant leadership.

Really honestly? I never knew there was a specific title for my approach to “leadership” … I’ve just genuinely rocked up to this business, and [now] workplace as myself [and only myself] leading the way I know how to: with absolute servitude to my team at every-single-touchpoints [right down to the touchpoints most people wouldn’t even think of, tbh].

That said, I really feel like I need to clarify something because I’ve spoken a *lot* about landing on servant leadership via TDP’s Instagram page … but all of those Instagram squares are just that: squares.  And there are character limits to the captions I can share there, and I’d need an *entire* podcast dedicated to servant leadership alone … and I still wouldn’t even have it fully explained [not to mention that I’m still bluddy learning so much about what it all means for me *too*].

And that’s not what I mean when I describe myself as being a servant leader [I work with x2 professionals on an ongoing basis to ensure that when I’m leaning into servant leadership? … I’m not serving to the point of setting my soul on fire].

So what does servant leadership look like without setting your soul on fire?

If you’re going to serve? … you’ll need to put your own oxygen mask on first.

They’re not wrong on domestic or international flights, y’know?

If that plane goes down, you’ll need your own oxygen mask on so that you’re able to serve those around you … and this all reminds me so much about servant leadership, and where I’ve landed myself 4’ish years into servant leadership [my business is 7+ years old, but I’ve only employed a team for x4 of those x7 years … so I’m a bit of a “baby leader”, tbh].

Guess what? … I ran out of oxygen. Completely. It’s an apparently really normal plight that a large chunk of servant leaders take, and I bluddy-well-wish I wasn’t that very normal statistic [lol!], but I am [and I was] … and I’m not any more.

Why? At all times [all times], I ask myself [thanks to a reminder that I have on a post-it note next to my computer], “is your own oxygen mask on first?”.

The thing is, my “oxygen mask” will look different to the next servant leader’s oxygen mask, and it usually metaphorically refers to what kind of support systems you need in place in order to serve others without feeling completely depleted by day’s end.

Get really clear on your boundaries.

So this brings me back to what I wrote at the start of this blog post, in that [it’s my humble opinion] that people have been hearing the words “servant leadership” > liking the description > going “all in” on servitude, without properly researching what servant leadership really is.

In other words, they’re taking servant leadership too far [take it from someone who’s been there. #itme]. #lol.

I’m getting clearer and clearer on my boundaries now.  I’m becoming more well-versed in what manipulation is [it’s been a tougher road for me as an Autistic person who struggles to recognise manipulation … even if it’s overt].  And I’m especially becoming clear on what I want [and actually expect] from my team: passion for this industry, accountability, the opposite of presenteeism [Google “presenteeism” if you’ve never heard of it, but it’s my least favourite person to hire], good manners [ask our MD how much bad manners rub me up the wrong way, ha!], and a good work ethic.

I had a beautiful friend recently PM me [in tears] because they were having a horribly tough time as an organisational leader, and an employee was doing the bare minimum and expecting overt praise etc.  I said, “wow.  What are you going to do about this? What’s your plan?” and she said – through tears – that she had an expensive jumper “added to cart” at their favourite online store, and I said, “Jesus.  No.  NO!”.

Because I’ve been there, and I’ve done that … and that jumper doesn’t buy respect.  The opposite, actually.  If she’d checked out on that jumper and rewarded someone for doing the bare minimum on tasks that were within her job description, and which that employee was being generously remunerated for … she was about to go and become the servant leader who’d set her soul on fire [not to mention the resentment you feel after having bought a jumper that honestly isn’t really even appreciated].

Know them.  Get better at knowing them.  Because without them? … you’re on a fast track to servant leader burnout, and if you’re somebody who does better with the inspirational quote-like stuff? I think Brene said it best when she said, “choose discomfort over resentment”.

Yep, it’s uncomfortable to execute a boundary, but I’d rather that than resentment [spoiler alert? It’s mathematically impossible to lead as a servant leader if you’re coming from a resentful place].

And then get clear on your bigger picture.

When you move from a place of servant leadership burnout to true servant leadership? … you’ll never feel more clear on your bigger picture [take it from someone who has personally experienced this, and very recently].

I’ve recently stepped away from that which was weighing me down [and unnecessarily so], and the irony is that in stepping away from that? … I’m empowering someone who’s better at “that” by giving them the autonomy to manage more of “that”.

And in stepping away from that? … I was [almost immediately] able to see a much clearer picture of my bigger picture, and any burnout I’d been feeling was replaced with feelings of empowerment, and reinvigoration, and renewed purpose.

And I want every servant leader to get to that place where they’re regularly putting on their oxygen masks, setting clear boundaries [and having the courage to choose the discomfort of executing a boundary, over the ongoing ugliness of sitting in resentment], and subsequently feeling really clear on their bigger picture.

Because that is servant leadership, and buying a favourite jumper for a bare minimum contributor is not, actually.

I share more about my journey as TDP’s organisational leader [and servant leader] over on my personal LinkedIn profile if you’d like to join me there?

Check me out here.